To Keep or Not to Keep? 5 Examples of When to Discard

“Failure to Recognize Trash” is a common syndrome.
Here’s how to fix it.

In my line of work, I’ve seen many instances in which items deemed precious, valuable, sentimental, or just plain practical were kept, only to be tossed (sometimes at great expense) years later.

I call this syndrome “Failure to Recognize Trash,” and I’ve seen the worst of it. In its latter stages, this insidious syndrome can transform your home into one massive junk drawer, resulting in truckloads of junk being hauled from your home. The accumulation, when consolidated, might leave your living room looking like this: 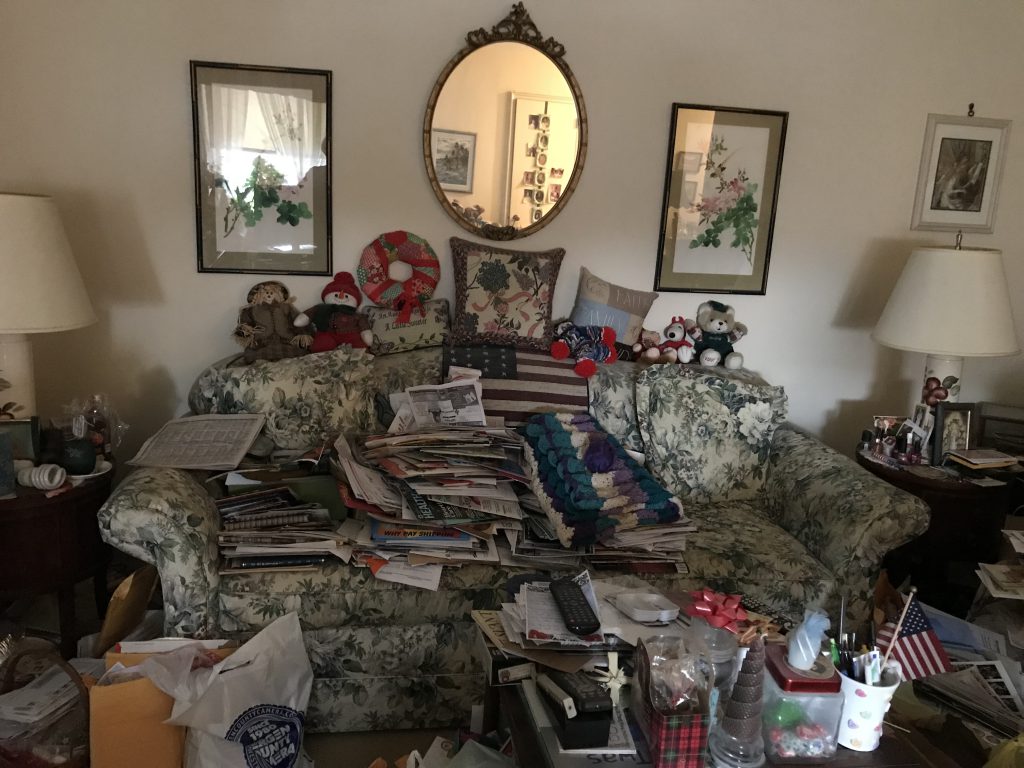 Unsightly, isn’t it? These are the truly virulent cases, of course, but “Failure to Recognize Trash” syndrome affects most of us at one time or another. Why are so many people reluctant to part with chipped china plates or cups, carpet and wallpaper remnants, boxes of National Geographic magazines, and “rare” collectibles from the Franklin Mint?

It’s human nature to feel a sense of attachment toward our possessions or to have the “what if I may need it some day” angst. We tend to imbue special objects with strong emotions, as if they retain the very essence of a lost loved one or a wonderful memory. In some cases, we think we’re being sensible (“Won’t that issue of LIFE magazine featuring the assassination of JFK be worth oodles someday?!” Sadly, no.) In other instances, we just can’t be bothered to remove objects at their point of failure or uselessness, so we stuff them away in some hidey-hole to save time and energy. And then, of course, there is the issue of perceived appreciation of value for things that once were in style but no longer are.

Although these scenarios each have their own cause and effect, they have one theme in common: If you are not using it and haven’t used it in years, throw it out! Here are 5 of the most egregious examples of “Failure to Recognize Trash” Syndrome.

1. Charities Do Not Want Your Moth-Eaten, Greasy Old Duds

Clothing that is frayed, tattered, stained, gnawed by a lion, pierced with bullet holes, or what have you isn’t a charitable donation—it’s garbage. The charity can’t use it, as most charities are resale operations. People with less means than you do not want to be wearing your old T-shirts with yellow pit-stains; they have more dignity than that. Forego that tax deduction and be considerate; don’t make Goodwill feel ill-will.

Would you really serve a guest from a chipped china plate or cup? No? Well, why are you keeping it? Toss it. I’ve had clients who lovingly boxed up two halves of an expensive china plate, certain that they’ll unpack and repair it once they move. They never do. Save yourself the headache and get rid of it, even if it cost you a pretty penny back in the day. Cherish the memories, not the plate. Note that this rule doesn’t apply to things that are easy to fix. If you can quickly glue the nose back on a clay figurine that your daughter made in kindergarten, do it now—don’t let it wait. Otherwise, toss it (preferably when she’s not looking).

3. Don’t Keep Watering Your Own Little Shop of Horrors

I had a client who had painstakingly kept alive some fairly horrifying leggy houseplants that had once belonged to her mother. She never cut them back for fear of killing them. They were limp, leggy, and ugly. She, however, felt an obligation to keep them going, despite their unattractiveness. Her mother had once nurtured them, after all. While it’s difficult to think of living plants as “garbage,” watering such creatures will likely bring you no pleasure. Dump them out in nature, which will reclaim them with open arms. If you like the pots, why not re-use them for a few fresh houseplants in honor of a loved one?

4. Your Home Is Not a Construction Zone

Carpet, wallpaper remnants, bathroom tiles, and old bricks are all bad news. “Ah, but aren’t they useful?” you might ask. Not really, unless you’re running a construction operation for gnomes who require a scrap of leftover carpet for their gnome-homes. It’s okay to keep a few paint cans around for 6-9 months for touch-ups, but you will never need the extra 5 feet of spare wallpaper for the guest room that you redecorated back in the 90s. Things fade and you can never patch them with your remnants. Call it what it is: garbage. Case in point: I once helped a client who saved everything—roofing shingles, a massive pile of bricks, and other construction debris. We had to bring in a special service to haul this junk away, in what turned out to be backbreaking labor up fancy terraced gardens half the length of a football field. Not only was their collection of debris not useful, it was also expensive to remove.

5. The Attic Is Very Scary

I don’t mean that there are fiends and ghouls in your attic, but how about 9 old mattresses, 3 moldy camp trunks, and 2 baby cribs (now illegal due to paint type and drop sides)? That’s scary! I had a client who had these exact items stored in his attic, and more. Everything went straight to the dump. If you find that something has reached the end of its lifespan of usefulness, please discard it immediately. Stuffing it into a crawlspace, attic, basement, storage shed, or other hidey-hole will not make it disappear. It will come back to haunt you when you have to move or clear out a house. Plus, you’ll have to pay to have it removed. No exorcist required—just some expensive labor.

I hope these tips have been helpful. I welcome your comments, questions, and suggestions in the “Comments” section below. Stay tuned for my next blog: The Slippery Slope of Self-Storage—To Store or Not to Store?